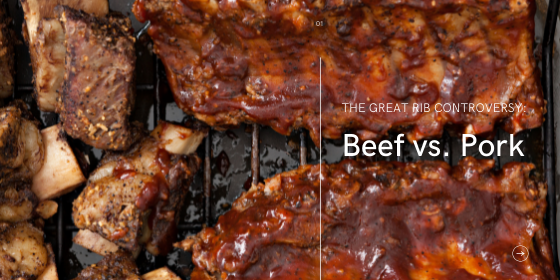 Carnivores are united in their love of ribs but what separates them is the question, “pork or beef?”. Ribs are not only delicious, but they’re also fun to eat, and fun to make. There are so many ways to make them, you can cook them in almost anything, and you have options in what kind of meat you use.

Choosing the right meat for ribs is essential because each kind of meat differs in taste, texture, and size. That’s why we’ll be comparing pork and beef to find out which one makes for a better rack of ribs.

Pork ribs are the most common ribs available; however, beef ribs deserve just as much attention. Both types of meat are very succulent and make for some amazing barbeque when grilled correctly.

Both beef and pork have different cuts of ribs that also vary in taste and texture. Beef ribs tend to be fattier and more flavorful than pork ribs, although pork spareribs, cut from the sternum, are also fattier and pretty darn tasty.

One thing that differentiates the two is where the meat comes from. Beef back ribs are leftover from where the ribeye is cut away, which makes them less meaty. Short ribs are from the lower half of the rib cage and are meatier and tastier.

Pork ribs are cut in a variety of ways, and depending on where they’re cut, will give you different textures and flavors.

It can be confusing to pick which cut to use. Mike Holcomb is our expert when it comes to all things meat, so we talked with him to get his take on the different cuts to find out which ones make the best ribs.

Baby back ribs are also referred to as pork back ribs, come from the back of the pig near the backbone. Baby back ribs are smaller than spare ribs, and contrary to popular belief, are not cut from baby pigs, they’re just smaller. Leftover from where the pork loin is cut away, they are usually curved, and just like every rib, they require slow cooking for a tender and juicy barbeque.

Country ribs or country-style ribs are gotten from the loin part of the pork. They are long strips of loin muscle found between rib bones. They have a good amount of meat and require slow grilling. Because they can be less flavorful, they’re great for barbecue sauce lovers!

Pork Spareribs are the same cut of meat as short ribs on beef. Right off the belly and the same cut, just much smaller. This cut comes from the same part where bacon comes from and is loaded with flavor.

Mike says: “Not a quick cook, the longer they cook the better they’ll peel off the bone. Too quick, it wouldn’t have the time to do what it needs to do pull off the bone.”.

Beef back ribs come off the prime rib and are not a quick cook item.

Mike says: “You need to slow cook ‘em, people like to throw them in the oven to cook them. Try throwing them on the grill for an hour, 1 ½ long cook. This breaks them down making them more tender.”

Mike says: “Short ribs slow-cooked in a crockpot or pressure cooker taste amazing. The meat is so tender and falls off the bone.”

Korean are cut 3/8 to half-inch thick.

Mike says: Korean cut ribs barbecue really quick and they’re popular because of it. I’m not as big a fan, could be more tender if they cook longer, but people love ‘em because they’re quick.”

And the winner is….

In the end, Mike’s choice of meat for the best plate of ribs is short ribs. “I’m spoiled – after so many years of working with meat, now if somebody had prime rib and short ribs to offer, I’d take the short ribs any day of the week,” says Mike. “Love that stuff. Tender, slow-cooked – the flavor is phenomenal. The day came and went where prime rib is no longer my favorite. Comfort foods – like short ribs or pot roast, slow-cooked items, with potatoes, carrots, celery and life is good.”

Mike also says one of the best meals he ever had was a pork shoulder roast in the crockpot with cream of mushroom soup. “Slow cook the shoulder roast – it’s the same cut of meat as a beef shoulder roast. Brown it first, and let it cook all day. Fantastic.”.