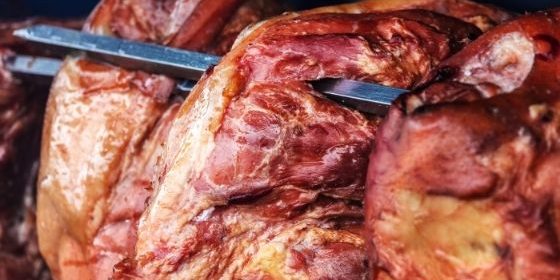 As the BBQ Host says – all ham is pork, but not all pork is ham. Ham is cut especially from the hind leg of the pig and usually cured and salted. Pork can be from any part of the pig and is typically raw, ready-to-cook deliciousness.

Pork – it does a carnivore good

Nearly 40% of the world’s meat production is pork, making it a popular choice for carnivores.

Ham is sold bone-in and boneless. Boneless ham is easy to prepare but can tend to be dry. We like to either glaze boneless ham or throw a little water in the bottom of your roasting ham, cover with foil and roast in a slow oven at 325°F.

Bone-in ham tends to be moister and more flavorful, and you can use the bone later for Split Pea Soup. It’s a little awkward to cut, so if you’re planning a fancy ham-carving at your holiday table, give yourself some elbow room, you’ll need it. Read this article from Taste of Home on how to carve a bone-in ham to prep yourself for carving in public.

Spiral hams are popular items in the grocery store. They can also tend to dry out while cooking, so glaze those babies and slow-roast at 300°F.

Ham roast, on the other hand, is ham that is not cured. This cut is made from the meat on the middle part of the shank bone extending to the hip bone on the hind leg, and is also sometimes called a shank roast.

While it may not be the prettiest cut of meat, it’s great for roasting. Braising ham roast with flavorful liquids like apple juice, beer or even ginger beer, instead of water gives your ham roast a wonderfully enhanced flavor. At 145° F internal temp, you’ll get a nice rosy center. At 155°F, the ham roast is well done.

If you get a ham roast, save that bone and use it instead of ham hocks in our split pea soup recipe from our Fall Comfort Foods recipe book. You’ll get a delicious soup you can throw in your crock pot before heading out to shop. It’ll warm your heart and your toes!

Many of my faves are not well known

You’ll love this cut – it’s got a wonderful flavor all its own, and like many of my favorite cuts of meat, it’s a little-known cut that, once you’ve tried it, you’ll want to have it again. It’s not as salty and smoky as a cured ham, and not as mellow as a pork shoulder roast that comes from the front legs.

For more information on cooking recommendations for various pork cuts, visit the University of Nebraska-Lincoln’s reference page from the Nebraska extension Fun with 4-H Foods page.