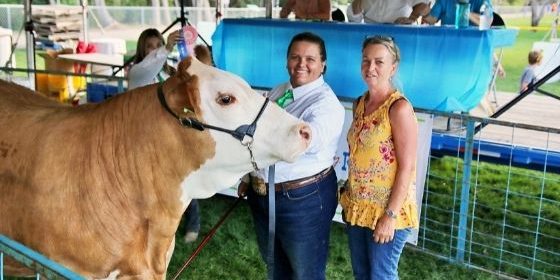 Kayla Holcomb, Mike’s daughter, joined FFA when she started high school. Before joining FFA she had been a part of 4-H from the age of 7, showing sheep and dairy cows. After seeing the people in FFA, and the work they did, it became a dream of hers to be a part of it. She wanted to wear that blue corduroy jacket so bad and as soon as she was old enough, she joined, and she showed both pigs and dairy cows for FFA for 5 years and won several awards for her animals.

Once Kayla joined FFA, she immediately got deeply involved in the program and became a treasurer, then Vice President and President for her program. After spending so many years in 4-H, Kayla noticed that many of the kids were dropping out of FFA after only being in the program for a year or so. She wanted to make a difference in the program and be a mentor for kids getting into 4-H, making sure that they had someone to talk to and had the help they needed. In doing this she believed they could have the support they needed to not only get through it but also find the fun in it and gain an appreciation for it.

The Power of Mentorship

While Kayla had been in 4-H, she had been fortunate to have been assigned a mentor who really helped her excel. When Kayla first started showing dairy cows, she was assigned a very stubborn cow that would not listen to her. Her mentor, Carly, reminded her how young the cow was and taught Kayla how to meet on common ground by letting it have some time to play.

Not only did Carly teach Kayla a lot about the animals, but she also treated her as an equal even though Kayla was much younger. After having such a great mentor, Kayla recognized that they needed more people like this involved in the program. After experiencing having a mentor who helped her in her work and who pushed her to continue with 4-H, Kayla knew she could be that same kind of mentor for younger kids by joining FFA.

Being in FFA also taught Kayla many other life skills including time management, money management, patience, and especially the habits of being in a good routine. She learned the responsibility of taking care of her animals, including checking on them during the holidays to make sure they were fed. She learned that her animals depended on her to survive, and she needed to make sure she organized her time well to make sure she had the time they needed from her.

What’s next After FFA

As Kayla ages out of FFA, her dream is to be a self-sufficient farmer. With parents who are generational farmers, she hopes to follow in their footsteps and take what she learned in FFA and 4-H and apply it. In looking at her future vision for agriculture, Kayla hopes for honesty. So much of agriculture is already focused on sustainability and that’s the production side of agriculture, but what Kayla believes we need is honesty in the work. Kayla believes that by being honest and showing the real work people do in agriculture, people will develop an understanding of how hard the job really is, as well as build a connection to where their food comes from. There is so much more to agriculture than what people see, like raising and taking care of the animals and spending quality time with them. She believes that this will not only help bridge the gap between consumers and producers, but it will also show the real cause of agriculture and what it’s for – to feed our communities.

Read why Karin is such a big supporter of ag education in our community here: https://carsonvalleymeats.com/karins-viewpoint-why-i-support-ffa/